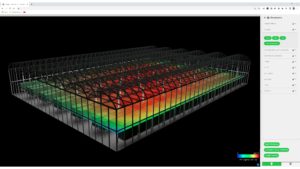 “There are no other competitors to HelioSol’s GreenHouseDesigner. No other software is designed specifically for horticultural applications unless the user wants to design the CAD model from the ground up,” says Ian Ashdown, Senior Scientist for SunTracker Technologies (whose software products are licensed exclusively through HeliosSol Software Solutions).

Ian Ashdown has had a long and industrious career in lighting, with his early work focusing on both software development for architectural lighting and LED research and development. In 2016, Ian received a request to simulate a lighting design specifically for an indoor horticultural environment. While addressing this request, he realized that there were no easy-to-use lighting design software programs that were specifically designed for horticultural contexts.

“We realized that no one wanted to learn CAD modeling for their greenhouses, so we developed a system that uses parametric modeling. This means that the user only needs to specify the building dimensions, glazing, and lighting layout, and the software will automatically create realistic CAD models for you and run the calculations,” explains Ian.

The software is called Cerise365+GreenHouseDesigner, and it follows a “Software as a Service” (SaaS) model that can be accessed through any web browser. It includes the ability to model not only electric lighting for greenhouses and vertical farms but also the distribution of monthly average Daily Light Integrals (DLI) inside the greenhouse.

based on geographic location, building orientation, glazing properties, and exterior DLI based on historical weather records and satellite data. Currently under development are the ability to integrate supplemental lighting and daylight to predict monthly energy consumption, support for moveable screens, light diffusion coatings, photoemissive and solar films, and virtual spectroradiometers.

“For greenhouse growers, we can calculate the distribution of DLI on a monthly basis over a whole year. You can orient the building, choose your crop, and see if it is worth applying whitewash or using solid walls in northern climates to absorb solar energy, reflect sunlight back into the greenhouse, and alleviate heat loss, either during the design phase or with existing facilities,” says Ian. Available software typically ill-suited to horticulture. As Ian explains, GreenHouseDesigner aims to bridge the gap between architectural and horticultural lighting simulation software.

Architectural lighting design programs are not designed for horticultural contexts, as they are based on the needs of human vision. This makes it difficult to properly calculate plant-based metrics such as photosynthetic photon flux density (PPFD) and DLI, which focus on photosynthetically active wavelengths. “Without the PPFD and DLI metrics, it becomes difficult to model lighting systems specifically for plants. It is also becoming increasingly important to model spectrum quantum distributions (SQDs) due to both daylight and supplemental lighting that are incident on the canopy. We are pushing on the luminaire manufacturers to provide both photosynthetic photon intensity (PPI) distributions and SQDs for their products,” says Ian. GreenHouseDesigner driven by decades of experience in lighting.

As previously stated, Ian’s impressive career in lighting began in nonhorticultural contexts. His pivot into horticultural lighting and his subsequent contributions to the industry have been immeasurable. Aside from developing GreenHouseDesigner, Ian has been researching plant responses to the light spectrum for five years and was the editor of the Illuminating Engineering Society’s 55-page Recommended Practice: Horticultural Lighting (ANSI/IES RP-45-21).

Ian has also written numerous articles on photoreceptors, the transmission of sunlight through glazing, etc., and oversaw the development of SunTracker’s free online DLI Calculator. Further, he has contributed to peer-reviewed journal articles and has been awarded 25 patents related to horticultural lighting applications.